From July 16th to August 2nd this summer, I found my mornings incredibly goat-filled.  Although I’ve always loved animals and farms alike, this would be my first time describing any morning of mine as “goat-filled”. After waking up with the sun, the New Mexican high desert stretching out as far as the eye could see beyond my cabin, I would walk to the main house, brew myself some coffee, grab a book, and await the first task of the day: milking the goats.

How did I end up here? Why am I in the middle of nowhere New Mexico with the ability to now recognize a goat solely based on her udders (seeing a pair of udders thinking “I remember you” is not something you easily forget)? It’s all thanks to WWOOF, or World Wide Opportunities on Organic Farms.

I had heard of WWOOF before, having a friend who volunteered in Hawaii and hearing about it off and on throughout my own travels. Having done a couple Workaways, which is very similar but expands beyond farming, I had a basic idea of what to expect. Since I am still “exploring various options” career-wise, I thought this would be a great way to save some money and try something new at the same time.

First, find the country in which you wish to volunteer. Since I didn’t want to travel too far from Colorado, I went to wwoofusa.org. At this point, you can see a list of farms from which to choose, but you are not able to see details. Only members can do that. Upon paying the membership fee ($40 for the US), you are now free to roam the site at will. Once the farm has been contacted, giving them the length of time you wish to volunteer, and given that they have accepted your invitation, you are on your way to living the life of an organic farmer! The rules are that you work 5 days a week, 5-6 hours per day. The farm gives you food and shelter in return, so you aren’t getting paid, but you’re not paying for anything, except your travel to get there. Many farms love having volunteers for a few months, but it can range anywhere from a day onward. Having never worked on a farm before, I didn’t want to commit to more than 3 weeks, in the event that it was dreadful and I didn’t want to be there.  Fortunately for me, that was not the case and I loved my 3 weeks in the high desert.

Living essentially off the grid, at the Coonridge Organic Goat Cheese Dairy, I understand now how to live with minimal amenities. We had WiFi for a few hours everyday, but with limited bandwidth and no cell service. Because the farm is situated so high up, well water was not an option, so the farm runs on rain water. I drank rain water, bathed in rain water, cooked with rain water, etc, etc. The minimal use of water alone showed me how much I probably waste on a regular basis. I was able to get by using hardly any in a day (aside from drinking water- that was there to drink at will). My shower, for example, used 5 gallons of water, and there was no need to do so everyday. I showered 2 times total. Would I want to show up in town on my 4th day without one? No, but when the closest neighbor is a 40 min walk away, vanity is of little concern. I also wiped my dishes with a paper towel after each meal instead of washing them (2 meals a day and it was enough).

Not only did they use water as sustainably as possible, but also things like cars- they drive trucks and cars that are as old as I am and they still run great. When something breaks, they fix it; when there are weeds in the garden, they feed it to the animals; everything has a purpose and a use. Society has never looked so wasteful to me as it does now.

Not only did they use goats for their milk, but they also butchered animals when the time came. This lesson was probably the biggest surprise to me, having always been appreciative of where my food comes from, knowing it was once a living, breathing animal, but never having actually SEEN an animal about to be slaughtered. I can now say I have seen an animal in its final moments, and it gave me new eyes into eating meat. I am eternally grateful and appreciative of the life that was taken to nourish mine. I don’t believe that many people have given much thought about what their food was before it was food. There is a disconnect when you buy a packet of meat at the grocery store, and how could there not be?  You don’t look into the eyes of that animal, you don’t talk to it, it doesn’t have a name, or a face, or a personality, or a life. We see it’s meat. We know it’s meat. Yet meat does not equal living, breathing being. But it was! That animal made noises, spoke in its own language, had friends, and a home.  In my case it was a lamb. This complete disconnect from what fills our stomachs can sum up what is wrong with our society.  We are not a part of the Earth, we are separate from it, and we control it. But that is not true and that is not human. We must give to the Earth what we take from it and yet time and time again we fail and will continue to fail unless we start doing better. This human will start doing better.

And finally, the tastiest lesson of all- I also know how to make cheese now!

In conclusion, WWOOFing is one of my favorite ways to travel now. The amount I learned in these 3 weeks was beyond what I anticipated when I first arrived and I know this will not be my last WWOOFing experience. If you want a new perspective and new skills, I strongly consider looking into WWOOF. It might end up being just what you needed and you also might be able to stuff your face with cheese while you’re at it (if I’m being honest, that’s why I chose this farm).

2 thoughts on “WWoofing in the New Mexican High Desert” 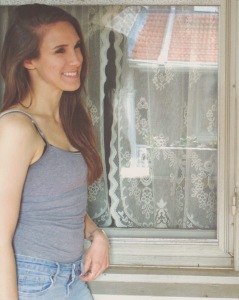 Welcome! I’m Megan, a nomadic globetrotter, spending the entirety of my adult life living all over the world. My hope is to use this space to share travel stories and life lessons that inspire others to follow their passion, whatever it may be (as long as it’s legal… or safely illegal… kidding…?), as I’ve always seen life as a long, fleeting moment meant to be as full as possible. Thank you for coming along for the ride! We’re only just beginning…