If you take a look at my Instagram (without reading the captions), it looks as if I have spent the last 3 months in a mystical fairyland where nothing could ever go wrong. The sun is always shining, the birds always chirping, and I wake up on a pink cloud surrounded by dancing palm trees with muscular men named Julio and Esteban serving me margaritas as I watch the sun rise.

As much as I wish the above scenario has been the case, I must sadly admit that I haven’t met a single Julio or Esteban nor have I indulged in even one margarita—not in a cloud, on a beach, or in a restaurant. There was one extremely gin-filled evening that involved me trying and failing to get everyone to play a card game and then laying on the floor analyzing the ceiling as if it were the sky. The little drops of plaster were the clouds.

This isn’t to say that I haven’t enjoyed my time in Australia. I truly have. It is a place unlike any other I have seen and its constant sunny skies have given my mood a consistent boost, proving the benefits of sun exposure (without overdoing it, of course*) and fresh air on the brain. It hasn’t, however, been one adventure after the other in the sense that perhaps outsiders may believe it has been.

Without getting into too many dull details, after 2 months in Sydney, I’ve moved north to the Cairns area in hopes that the tropical setting will make up for having to work in a cafe or restaurant, something I hadn’t intended on having to do in Oz. In Sydney, it’s winter, and therefore the high season has come to end, taking all kinds of jobs with it. But up north the winters are a chilly 80 degrees, so tourists flock to this region while the rest of Australia is somewhat cold–emphasis on “somewhat”–and cafes and restaurants look to increase their manpower.

But the point of this post isn’t to describe my decision-making or thought processes (if you want more explanation, feel free to ask). It is to discuss something many travel blogs do not acknowledge: boredom. I’ve spent much of my time awaiting calls from potential employers and as such, my budget and day-to-day life have been extremely limited. Most days I’ve had nothing to do but walk around my neighborhood, as even taking public transport slowly drains the wallet, with Sydney’s public transport being especially expensive. Having friends also means spending money, so I have had minimal social life since March. As an introvert, I typically welcome this alone time and have been gifted with a high tolerance for long spans of solitude, and yet there have been days where the solitude has taken a massive toll on my emotional state.

Given all of this free time, a person wiser than I would use it to read as many books as possible, or heck, write a book for that matter. But I am not wise and my head has been so crowded with uncertainty, that my ability to concentrate has been greatly hindered. Sitting down to write is one thing, actually getting words out in a meaningful way has been quite another.  I know that many successful people push through this lack of inspiration and sit down and start writing anyway. In one episode of Chase Jarvis’ podcast, he quotes artist Chuck close, “If I only did work when I was inspired, I wouldn’t have very much work.” I try to heed this advice as much as possible but I fall short very often.

Many days I’ve spent feeling almost depressed due to the lack of purpose that one feels without a job. This is where the nifty Australian sun comes in and typically a quick walk outside turns my mood around. This isn’t fool proof, however, as back in Sydney I took so many walks around my beloved neighborhood of Balmain that I even grew bored of walking out the door. One day, towards the end of my time there, I went for a walk and turned around after only a few minutes out of sheer boredom. I went back to my room and ate snacks while watching Netflix.

Speaking of Netflix, I’ve watched A LOT of it. One day I watched 10 hours of The Society and finished the season the next morning. I’ve watched all 7 seasons of Gilmore Girls one and a half times. Every time there is a new show or movie, I click that play button so fast, I might as well be known as the Flash. My brain may be turning to goop, but at least I’m all caught up on all the latest Netflix rom-coms (Have you seen Someone Great? Highly recommend.)

I also recognize that I am pickier than the majority of my fellow backpackers. Many travelers are happy to fruit pick or find any job in any restaurant or bar, but my threshold for dealing with a job that I hate is too low and until I am living out of box on the side of the road, I won’t work somewhere that isn’t giving me the good vibe I’m looking for.

The decision to move north has been proving to be the right one if I can base any judgment off of the entire 9 days I’ve been here. There has been a renewed sense of inspiration, and while I am still waiting on the job situation to unfold, my writing has picked back up. The skyscrapers of Sydney have been replaced with rainforest-covered mountains that are ever in view as I stroll down sidewalks unhindered by packs of oblivious tourists. My budget is tighter than it has ever been, so my meals have been slightly smaller here than in Sydney, but don’t worry (mom), after indulging in $3 boxes of donuts back in Balmain, I think my body is thankful for the detox. 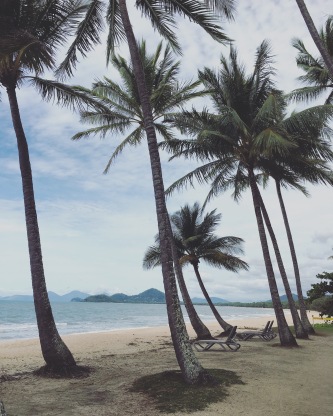 The reality of long-term travel is that it is not always going to be filled with action. Sometimes there are going to be too many rest days. There will be days where you don’t want to take it easy, but you don’t have a choice. My answer to these feelings of solitude and boredom has been gratitude. Although the reality of long-term travel may include bouts of monotony, the other reality is that you are in a place for a short length of time and then you won’t be anymore. Every time I feel myself sinking into negativity, I remind myself of where I am. “I’m in Australia” has been a sentence on repeat in my mind. A simple sentence, and yet packed with a punch of mindfulness. I’m in Australia. And soon, I won’t be. So, regardless of my employment status or whatever funds are lacking in my back account, I am here. And, you know, I think that’s a lesson that ultimately applies to all, travelers and non-travelers alike. This moment is temporary, so be here now.

*I still remember playing a lacrosse game in high school against a team that had several overly-tanned individuals, whom we endearingly named “Chicken Nuggets”.

I’m Megan. Part globetrotter, part health-nut (unless there’s pie around. I love pie.), part a million other things.  I’m here to share my love of, well, the things I love.  Books, life, travel, whatever I’m up for talking about on any given day. So thank you for joining me! Oh and if you can’t find me, I’m probably on a mountain somewhere.