North of Edinburgh, along the Water of Leith, sits an area by the name of, well, Leith. Although it is part of Edinburgh, Leith has a history all its own as a prominent port town that wasn’t incorporated into the big city until 1920, and it is oft ne’er discovered by the normal tourist. We, however, were not your normal tourists (we’ve already established that we were dumber*). Blisters be damned (the reason can be found here), our final afternoon in the city left us curious about what is was like away from the hustle and bustle of the center of the capital and off the beaten path.

A long walk down Constitution Street that had us questioning where the heck we were even headed to—you know those times, like is this area safe, am I a faster runner than my friend just in case—paid off when we were greeted by the waterfront**. In fact, the name “Leith” originates from the Celtic for “flowing water” and a visit to the port town is incomplete without a walk along the river. 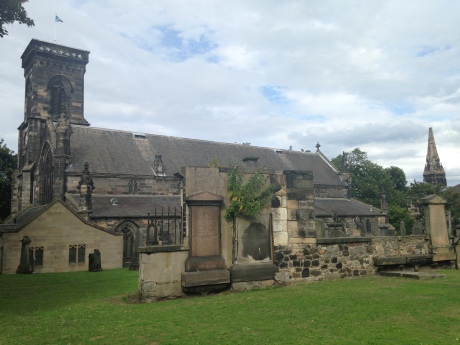 However, before unintentionally ending up at the water (did we do anything intentionally? I do wonder sometimes), we came across an old church and wandered onto the grounds. It turned out that this church, South Leith Parish Church, was rich in history. Around 1483, the original church was built and dedicated to St. Mary. Since that time, a number of historical folks graced the church and Leith with their presence— in 1545 the ever lovely John Knox witnessed here the preachings of his future victim, George Wishart, a protestant (they both make an appearance here); two years later it was used by the English as a prison for Scottish nobles; Mary of Guise, mother of Mary Queen of Scots, worshipped here; Cromwell’s troops utilized it in the 1650’s; the list goes on. All of this I learned from a sign on the grounds. As we wandered more, we discovered tombstones from the 1700’s, tombs that were so old the writing was illegible, and ruins of the old structure (some of the church was restored in the mid-1800’s to its present appearance, but kept much the same as its older self). All of this hidden in plain sight for the traveler who is vigilant enough. Perhaps I haven’t been giving myself enough credit.

It was here that an old couple, overhearing our American accents, stopped us to talk about where we were from and what we were doing around those parts. Times like these, being stopped on the street by locals in the friendliest of manners, makes me feel like the path I’m on is officially unbeaten. What was said during the interaction is long forgotten, but to greet us with such delight and curiosity only heightened my admiration for the town of flowing water.

Speaking of flowing water, as we eventually wound up at the famed waterfront, we found a path that was truly Scottish. With song lyrics and sayings etched into the sidewalk, we found ourselves stopping at each square to read what it had to say and then giggling accordingly. Yes, this place certainly has its charm and a witty sense of humor.

Google informs the inquirer that Leith is “hip” and “trendy” with many great places to eat. This must be true, but the impression I was left with on that sunny afternoon was simply that of tranquility and joy. If you find yourself in Edinburgh with a need to escape the liveliness of the tourist crowds, Leith is awaiting your arrival. Ours was a quick trip, but one I will always remember, and with a tinge of regret a few hours later, nursing my feet, wondering why we just had to walk to every single place we went.

*I should stop including my friend in this description. She’s smarter than I.
**It is safe.